The expansive career of photographer Stephen Shore, which began at an early age and was cast in good luck and youthful hubris from the start, is laid out in great detail across the third floor of the Museum of Modern Art until May of next year. This retrospective exhibition contains over 500 photographs, archival books and material, and a row of ipads displaying the artist’s well-maintained instagram feed. Shore’s practice is the ultimate in straight photography. Especially important for its early adopter status to the application of color in photography, his stark, straightforward oeuvre provides window after window into the experiences of the artist as he explores the United States, from New York City as a teen to the spread of the MidWest as an adult. 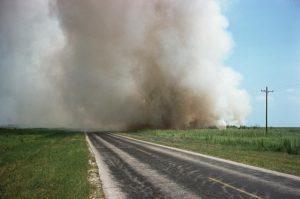 Spanning five decades of work, the show opens with Shore’s candid and not-so-candid captures of the fashionable denizens of Andy Warhol’s factory. Portraits of attractive peers standing before their own harsh shadows mix with late night snaps of Warhol and cohorts out to eat in Chinatown. Timeworn and trite as it is has become to see this particular set of cool people still looking and being cool, the documentation of The Factory undeniably does its part in casting the mythic artist role that Warhol intentionally embodied, and therefore holds a special place in art history, if for no other reason that that. This section sets the tone for the rest of the show, signaling us to keep in mind as we meander past each frame that, despite the current ubiquity of his style, Shore was once on the cutting edge of culture, and a pioneer of common practices in his field. 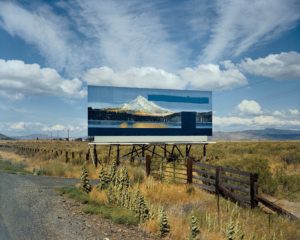 Of the overwhelming volume of quotidian moments perforating the gallery walls, what follows is a small selection of high-tension compositions that rang out about the rest. Untitled, 1975, is an image divided into sections defined by nature’s tactility: the lower third is a grassy Midwestern field sliced through by an asphalt highway road, cut off from view upon meeting the edges of an encroaching smoke cloud, billowing on the horizon. His 1973 picture, Mr. Shore’s Breakfast, Trail’s End Restaurant, Kanab, Utah, August 10, 1973, yet another striking snapshot of his traipses through Bible belt America, presents a still-life breakfast scene of pancakes and a pitted cantaloupe. Gazing thoughtfully at this meal, you can’t help but smile, tongue-in-cheek, at the nascency of food photography before it was a hashtag. 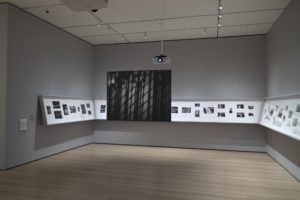 U.S. 97, South of Klamath Falls, Oregon, July 21, 1973, 1973, is a picture of a roadside billboard and surrounding fields unfolding into distant mountains, but more importantly, it is a juxtaposition of two natural scenes: the billboard’s lush mountain lake, and the actual landscape: arid, sprawling, and overgrown. Digital natives might relate the familiar “image within-an-image” effect to basic jpg layering and may share an aesthetic impulse I’m reminded of when working with editing software. When copying or dragging an image from the internet and pasting it into another image, there is a moment – before beginning the process of scaling and otherwise adjusting the new image – a moment of temptation to simply leave it alone. To let it remain dead center, enclosed by the now-more-lively periphery of the image that sits behind. It is shocking how novel and delighting it can still be to find that the composition you’ve created by a slight or default action is beautiful or dynamic or suddenly open to meaningful interpretations. I wonder if this is like the feeling Stephen Shore had when he took this photo in 1973. 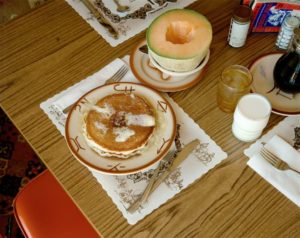 To that theme, Shore and curator Quentin Bajac have, in a sense, “dragged and dropped” five wanderlusty decades of passing snapshots onto the walls of the MoMA – sans lighting, cropping, tweaking. True to his overarching method, the exhibition makes no judgements, and the pictures are generally light in meaning and conceptual depth, instead focusing on dimension, shape, light. His priorities are the formal qualities of a world that he continues to rigorously refresh with each city, each capture, each click.