Mike Kelley’s Extracurricular Activity Projective Reconstruction #8 (Singles Mixer) is a multi-channel video and sculptural installation currently showing at Luhring Augustine. It is one of the 31 reconstructions that make up the larger project Day is Done (2005), in which Kelley investigates the psychological trauma caused by group activities such as clubs, sports, and dances – functions he described as “socially accepted rituals of deviance.” For this epic reconstruction project, he sourced images he found in real high school yearbooks of “dress up days,” recitals, and documentation that showcased cultural and subcultural costuming. This includes women in goth get-ups and KISS makeup, or hill-billy farming clothes like denim overalls, along with other absurd thematic iterations from which he created a series of video vignettes uncannily mimicking the found images. In Foul Perfection: Thoughts on Caricature, Kelley writes, “For Freud, our “primitive” history accounts for both occasional feelings of uncanniness and our enjoyment of modes of entertainment that evoke these sensations in a controlled way.” Day is Done, with its dark, uneasy humor extends these occasional feelings of uncanniness into a territory of constantly conflicting feelings of repulsion and glee. 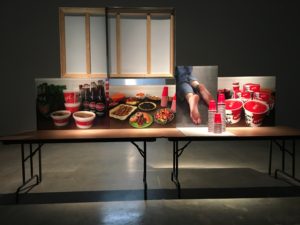 Singles Mixer is a video in which a hillbilly, KISS fan, computer nerd, witch, and four African American women disjointedly chit chat about their ideal male fantasy. The men in question – all popular entertainment icons – are rendered in the space as naively styled painted portraits, an amusing inclusion of traditional painting within this eerie vaudevillian set-piece. The celebrity heartthrobs are fawned over by the “appropriate” women – the KISS fan likes Gene Simmons, the hillbilly woman is crushing on Garth Brooks, the black women adore R. Kelly and Kobe Bryant, and the witches love Brandon Lee from The Crow. Uncomfortably, the women are blatantly reduced to stereotypical assumptions associated with their race, gender and class. 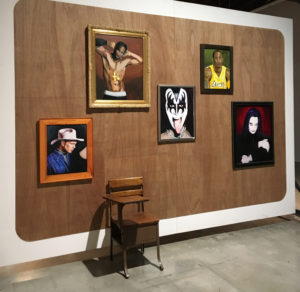 Typically, when re-visiting works from the past that deal in any way with racism, sexism and restrictive conformity, I half expect to uncover previously overlooked instances of insensitivity and privilege. As I re-examined this formative favorite’s investigation into identity construction and its absurdities eleven years after its creation, I was relieved to confirm that Kelley is particular, conscious and explicitly critical of the inflammatory themes within the subject matter he was focused on picking apart. Even so, looking into this decade old work from where we stand, in an artworld flooded with ideas around progressiveness, inclusivity, safe spaces, and fluidity in all things, it feels dated to see these aesthetically regressive, hollowed out identities cornily mashed together for a hammy critique on the vast psychological trauma produced by the American educational complex and its associated group rituals. 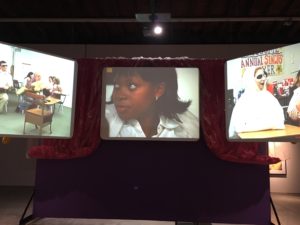 Ironically, one realizes that this work has, at its core, many of the same issues that face contemporary art and society today. Singles Mixer confronts the failure of nuance in psychological identity structures created by repressive social systems like school and traditional workplaces. Today, one might ask, what are our equivalent of these systems? How do these issues persist online? Is social media repressing expressions of identity, or enabling them? How can we connect the women’s longing (in the video) for controversial public figures with current allegations of similar public figures abusing the power afforded them by this constructed ardor? How does the artworld itself measure up as a ritualized system with normative and non-normative behaviors? Apt that this work is being shown at this point in history, amid scandal, protest and overall major shifts in constructions of the self, as it stands strongly as an imperfect but loaded comparison to our whirlwind of current affairs.