Five Sculptures at Essex Street Gallery is a discreet assembly of five physical works by four artists – Ghislaine Leung, Carolyn Lazard, Park MacArthur, and Niloufar Emamifar – with two sculptures that incorporate light and sound. The exhibition’s minimal forms, comprised mostly of “found objects,” some with unifying protective functions, others with less easily identifiable points of connection, appear to jointly articulate key relationships between bodies and various conditions of architected space. The exhibition text (which is merely a dry list of each work’s title, materials, and exhibition history), conspicuously avoids artist biography as well as a curatorial statement. The titular five sculptures are actually quite strong individually, yet when grouped together without certain contextual elements and a clear guiding thesis, seem to lose their potency. 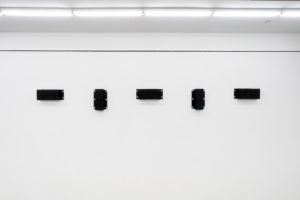 Adhered to the ceiling of the entrance area are twelve Dohm white noise machines in four rows, a work by Carolyn Lazard titled A Conspiracy. Lazard’s practice can be characterized by their engagement with the material and psychological conditions of illness and health. To produce legible imagery that seeks to represent their “patient” subject position within the medical apparatus, they often use wellness culture tropes along with signifiers from the therapeutic and biomedical environments they frequent. At Essex Street, the low mechanical hum of A Conspiracy recalls the white noise machines found outside the offices of psychiatrists, hospital bedsides, hotel rooms, and in the background of massage therapy and acupuncture rooms. Inclined though one may be to relax amid the soothing buzz, their militant formation and sheer force of quantity signal that something is not quite right: like a librarian shushing children as they pass the front desk, we enter the show through this unsettling double bind, somehow on high alert yet also enveloped in a pleasing lull. 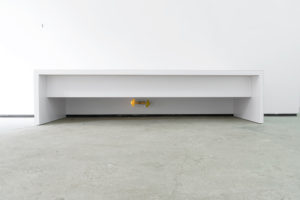 Park MacArthur’s two sculptures, Passive Vibration Durometer Facts 6 and Passive Vibration Durometer Facts 7, comprise a total of eight rubber loading dock bumpers and steel assembly hardware installed at 48 inches from the ground. Commercial rubber’s primary role is one of preservation and protection: it is a barrier, a buffer, a flexible screen between our tender bodies and things that may harm us. Named for the use-function and attributes of the product they describe, these works easily call attention to the small but violent impacts we experience daily, and question the standard of accommodating “normal wear and tear” for a certain majority populace – a standard found in many forms in all kinds of public spaces. This standard is one that excludes those whose bodies are not considered “normal” by an able-bodied public, who cannot move through the same easy, mass-trafficked convenience channels, and whose alternate routes may not be so padded. 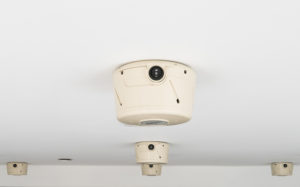 MacArthur’s history of challenging the insufficiency of institutional accessibility (her 2014 show Ramps, also at Essex Street, displayed the portable ramps of various art museums and galleries), suggests that the unusual 48 inch height may point toward the eye-level of the average wheelchair user. Furthermore, because the space opens up to the basement level, but the row of bumpers remain at their now towering position, a situation results that succeeds in democratizing the viewing experience: the sculptures, hovering simultaneously above the basement level and away from the ground level, become equidistant from all observing parties, whether they are confined to the ground-floor or free to roam the area below. 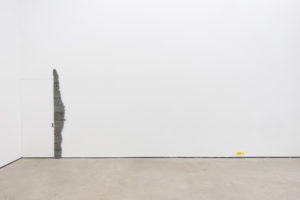 Dotting the base of the walls, twenty-two cartoonish, orange, mushroom-shaped lights glow from every available power outlet. Ghislaine Leung’s Shrooms traces Essex Street’s electrical wiring, flagging each point where the unseen circuitry interfaces with the human world — just as mushrooms in Nature are merely the blossoms of a more intricate, subterranean fungal network. With Shrooms, Leung challenges us to imagine our other invisible, perhaps more sinister, cohabitants: microscopic organisms living in our air and water, systems of oppression that are only noted during a flair of civil unrest, and the surveillatory activities of data mining companies whose blooms sprout as targeted advertisements, voter algorithms, and eventually, state policy.

Each of the works in Five Sculptures share an insight into inhabited space—but what about the external conditions of that space? Niloufar Emamifar’s haunting Three Inches And A Half materializes the small gap between the exterior of two Palestinian-owned buildings in Los Angeles. One building is a mechanical shop, the other is a former mechanical shop that has been converted into residences. Though the residential building has not changed owners, its transition has affected the social (and likely economic) landscape of the surrounding area. Emamifar’s pigmented plastic cast of the area between the neighboring structures is more than just a 1:1 representation of space; it portrays a space heavily loaded with civic and global issues encompassing real estate, economic migration and displacement.