“A sense of rawness translating in the meaning of openness.”

Paul Zimmerman: You were born in Bulgaria and have been living in the US for many years now. Does your multicultural background influence your art?

Iliyan Ivanov: It certainly did in two important ways. First, in respect to the subject matter: while growing up in Bulgaria I created art with a strong political and social leaning peppered with symbolism; some of these works can be seen on my FB page “Visions from the Crypt”. After moving to the U.S. the focus of my art shifted to themes of exploration and personal reflections on life experiences. Second, in terms of technique I have been influenced by both figurative and gestural styles of painting using various materials (ultimately abandoning oil and embracing acrylic), incorporating collage (thanks to discovering the art of Romare Bearden) and experimenting with large multi panel installations.

PZ: What art do you most identify with as an artist?

II: My influences have shifted with time and age. In young age I was very much focused on the craft of “classical” drawing and painting. My first artistic hero was the 19 century Russian seascape painter Ivan Aivazovsky. But I also developed appreciation for non-figurative and expressive styles, particularly the artists from the Cobra movement. And yet my very recent fascination has been with the art of Pompeii both from art book and after my visit there in 2019. Ultimately one core feature of my work is that it should convey a sense of rawness signifying readiness to reach deep and look for meaning behind conventional imagery.

PZ: You work in abstraction and figuration. What kind of work do you most enjoy doing?

II: My stylistic approach depends on two factors: one is the “meaning” of the work since I consider the art of painting as a vehicle of philosophical thought; the other is the emotional states that accompany the creation of any particular work. I am aware that my styles tend to shift from one project to the next – and that is because things in life change, sometimes very dramatically and as an artist my reactions to life events influence strongly whatever happens on the canvas. At the end I most enjoy the feeling that I get when something inside tells me that the work is “becoming” its own.

PZ: How do you create your work?

II: I love to draw but I keep drawings in small size sketch books – I rarely use those for other works. On occasions I scribble small compositions as preparations for large projects, which usually come in series of paintings. However, I almost never prepare large works by drawing on the canvas or the paper but rather let the painting “discovers” its own shape. Often I have “a vision” in my mind of how a painting should look; sometimes these come as dreams. These visions usually keep pushing from inside to be “painted out” – the results are almost never close to the original “visions”.

PZ: You work in various sizes. Which format do you prefer? 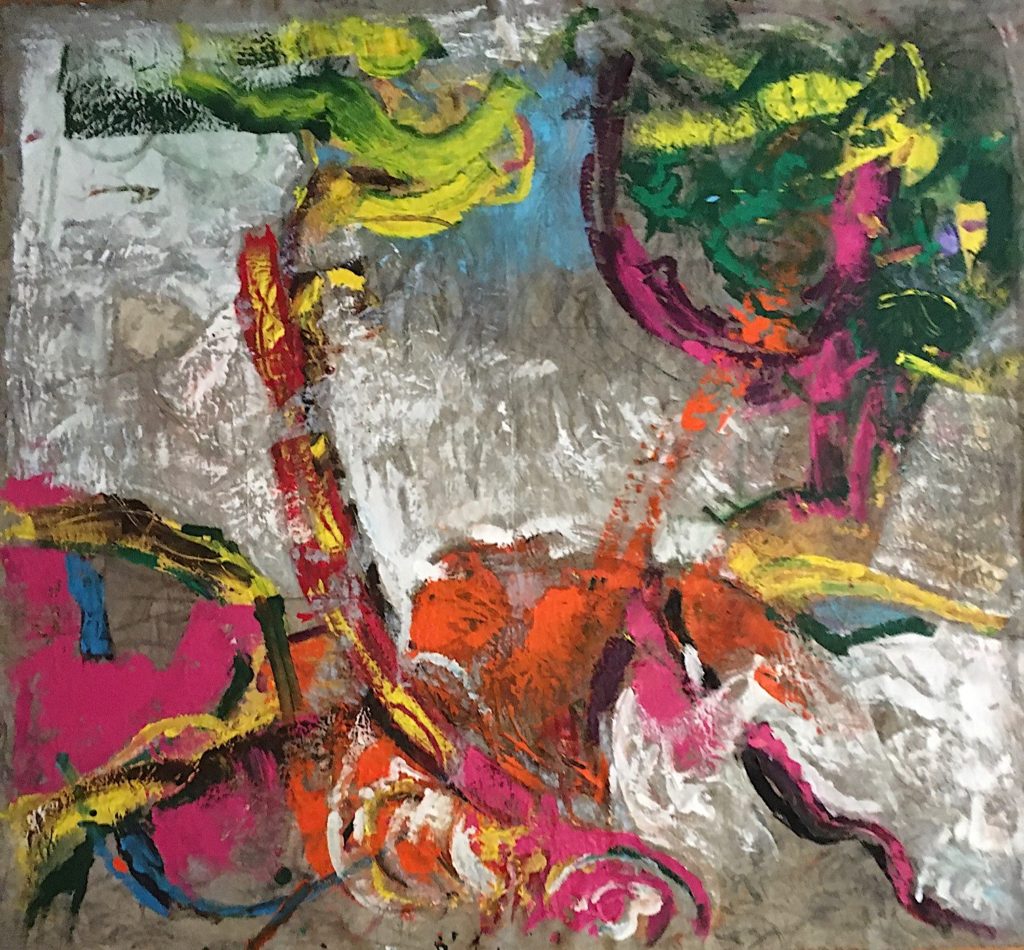 II: I work on both large and small pieces simultaneously – it is like the mental exercise of “Imagine you are as big as a mountain” then “Imagine you are as small as a grain of sand”. Needless to say, the topic of the work guides the size choosing. But  there have been times when things happen serendipitously – for instance recently I re-discovered a roll of paper I bought probably over a year ago (and have forgotten about) and started to experiment with action painting as I kept unfolding the roll – next thing I know it turned into a 50-feet long art piece according called “The tale with many tails”.

II: I have had different impetuses to start new works. I have created series of works (like “The Maids” series) paying homage to other artists and in those cases my starting point was to find a painting I want to emulate. Other times a life event has affected me to the point that I knew I have to create a painting about it – for instance one of my latest pieces is called “The boat trip” and reflects on a memorable boat trip we took as family around the island of Capri. For my “In Memory of…” series I drew inspiration from scientific concepts (being neuroscientist myself). At times some seemingly random idea will start growing in my mind until it finds its way. One overarching goal is that the art work will “narrate” the emotional experience of whatever the prompting event was.

PZ: How has your practice changed over time?

II: It changes constantly and yet certain things remain steady. The things that are more sensitive to change are the choice of media and the size of the works – during the last year I have worked on small wood panels (8 X 8 inches) and on paper and canvases as large as 6 X 10 feet and larger. But I exclusively create art by doing the old-fashioned thing that someone described as “the magic of putting paint on canvas”. And I still do that by placing the canvas on the floor as I am standing and walking around it and having music playing in the background.

PZ: How does the pandemic influence your work and activities?

II: As my professional work is related to mental health, I have seen firsthand the heavy toll we all, but particularly young people, have paid during the pandemic. So professionally my approach was to continue working through out and I have gone (physically) to my office daily. As a musician the pandemic has put a hold on live performances (although I managed to play couple of gigs over the summer) and I have also used the time to write original music. As a visual artist I moved my work from my studio in West Harlem back home. One reason was saving time – I did my art projects after work mainly at night that way minimizing travel and also freeing my weekends to leave the city and drive up and down the Hudson valley region. Initially I just continued working on a series of large abstract paintings that I started in 2019. More recently I started new work as part of an upcoming show for the Openings Collective – I have been a collective member for over 10 years. As I was contemplating on possible themes, I started reflecting back on my Pompeii impressions and realized that visual artists have one unique advantage – we create art that may live for long after us. The most eloquent testimonies for the greatness of gone by civilizations is the art they created which survived of all things a volcano catastrophe.

II: I already mentioned my classical influences which must include Turner. At different times I have been fascinated by the work of many painters. Just before the pandemic I saw the last Julian Schnabel show at the Pace gallery and learned how he selected the canvases for these works which triggered ideas of experimenting with unprimed canvas. I should say that I have felt a strong pull to the work of artists from the New York Expressive Abstractionism, the Cobra and the Gutai movements. My latest work has been influenced by artists like Pierre Alechinsky (the last living Cobra artist) and the New York artists Joseph Stefanelli and Edward Giobbi.

PZ: What is your next project?

II: In terms of exhibits I am taking part in a virtual show “New Beginnings” at the Islip Art Museum with a piece called “Windy days in the painter’s backyard” (acrylic on unprimed canvas 6×6 feet) running until November 7th and the Annual Fall Show of the Openings Collective with a piece called “Centaur Tag” (acrylic on tyvek paper 4×10 feet) opening on October 18th until December 4th.

In relation to artistic ideas I have been working on a project called “American Renaissance” that includes five installations composed of various numbers of individual canvases, works on paper and wood panels. These are called “The Gospel”, “The Groove”, “Go Far”, “The Games” and “Gotham” and are thematically related to topics of spirituality, creativity, innovation, politics and urban life. It is an ongoing “magna opus” kind of project that started 6 years ago and is maybe 50% complete, so I anticipate a few more busy seasons.