“Making art is a learning experience.”

Paul Zimmerman: There is a sense of shifting space and time in your work. Where does this complexity come from?

John Drooyan: My interest in art is foremost as psychological expression of the human condition;  which sits, stands, walks and runs, and rests on time. I was introduced  to  Southern California artist Robert Irwin’s creative exploration that addresses space and perception,  and  intuition in service of the creative process, in a  book review I read in the New Yorker of  the book by Lawrence Weschler about  Robert Irwin, titled “seeing is forgetting the name of  the thing one sees”,  and then reading the book, that describes Robert Irwin’s inquiry into perception, intuition, and chance: including his early minimal installation at MOMA, his groundbreaking creations of large scale art landscape art, and his expeditions to Hollywood Park to bet on the horses and beat the odds. Soon thereafter, I applied Robert Irwin’s ideas in a series of photographs I took in Death Valley of sculptures I designed based on mathematical concepts, for chapter opening art in a series of mathematical textbooks. My Death Valley photographs provided the conceptual and perceptual foundation for my subsequent mixed-media and digital artwork. To these ingredients I attribute the shifting space and time in my work.

PZ: What is your artistic process? How do you create your images?

JD: For me, making art is a learning experience, which begins with a conceptual framework that directs my exploration of potentials arising in the various mediums I work with.

PZ: How do you find the balance between technology and artistic expression?

JD: Technology offers new creative tools which enhance the scope and possibilities of making art.  However, be wary of robots that make art in the age of art product. 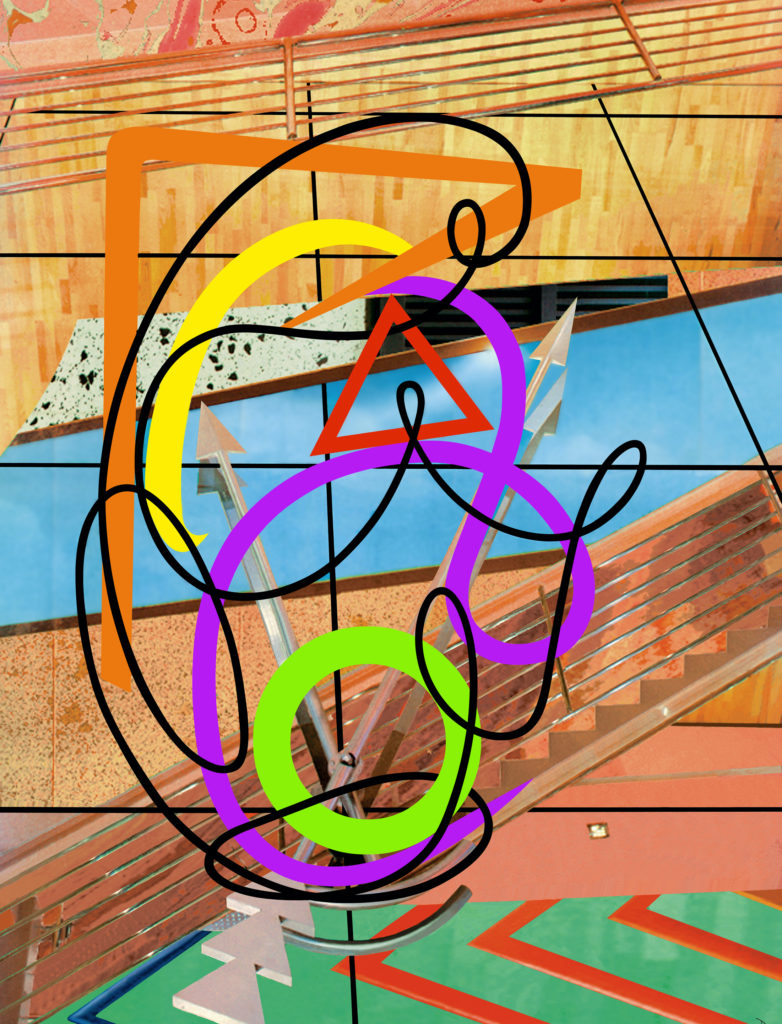 PZ: How did your practice change over time?

JD: As a college undergraduate  I had no idea of my future interest in art until my senior year when I took an art history course taught by Albert Elsen, an eminent Rodin and Picasso scholar, who wrote the textbook for the course titled Purposes of Art.  Midway through the course Picasso passed away, and Professor Elsen gave a magnificent three hour memorial lecture on Picasso: Full of explanations and anecdotes about Picasso and his work, bringing Picasso to life in the lecture and slide show. The following year I had the opportunity to travel in Spain while reading Roland Penrose’s biography of Picasso, eventually arriving in Barcelona where I spent many days visiting the Picasso museum.

Upon returning from my travels, I sat in on a  photography class taught by my artist/photographer friend David Stephenson and his friend Lorie Novak.  During the course, or soon thereafter,  I was introduced to the photography of Clarence John Laughlin – which showed me how photography could be both a psychological and literary expression, arising from photography’s refined descriptive capability to create imagery both real and fictitious. Thus began my pursuit of photography.

Several years later I worked for Dellen Publishing Company in San Francisco.  As part of my various job duties, I was was assigned to take (black and white) photographs to illustrate real life applications of mathematics for math textbooks, which were well received; and I was commissioned to create chapter opening photographs for a series of math textbooks.  At the time I received the commission I was familiar with the photographic creations of John Pfahl, which involved integrating placed sculptural objects in landscapes he photographed; and having a not too distant memory of a night spent on Zabriskie Point in Death Valley by moonlight, I proposed to design and create sculptures of mathematical concepts that I would photograph in Death Valley.  My proposal was accepted…

In the early design stages of the project,  I was introduced to Robert Irwin’s inquiry and exploration addressing space and perception, and intuition and chance in making art,  which provided me with a foundation of ideas to assist me as I proceeded.    Over two five day sessions, in June and late October, I took 26 (medium format) square black and white photographs of my sculptures of mathematical concepts among the dunes, creeks, and canyons a few miles southeast of Zabriskie Point; 10 of which I have enlarged as 15”x15” prints, and call the Desert Target series.

The Death Valley photographs appeared in three math textbooks that were commercially successful; and provided  the conceptual and perceptual foundation for my subsequent mixed-media and digital artwork; and lead me combine photography and sculpture in future projects.  In reflecting on my Death Valley photographs in preparation for this response, it occurred to me that they are the obverse of Andy Warhol’s paintings of Campbell’s soup cans in that they were created as a commercial project, and reach beyond and transcend their commercial subject.  Soon after taking the Death Valley photos  I purchased a 4×5 camera and  began photographing architecture and interiors commercially, and  public sculptures and related subjects over many years to come.

With an eye to the future, I bought my first Macintosh computer in early 1994. Soon thereafter, I moved to Southern California, where in addition to architecture, I photographed thousands of head shots and individual and group portraits (sports, church, business, et. al…) over the following decade; and began work on my digital artwork series titled “Headquarters”, which includes my hand drawn and painted imagery combined with photography, and some time later the “Ocean Park” series – the only artwork I’ve made that does not involve photography.

PZ: Where do you find inspiration for your work?

JD: Making art is the most interesting thing I do: with each new work I surprise myself.

PZ: How would you describe yourself as an artist?

PZ:  What is the role of art in our society?

JD: To paraphrase the great jazz drummer Art Blakey : Art is the fruit of man’s labor which blows away the dust of life’s daily struggle, and transcends time.

JD:Digital art including a new series titled Antillectuals, and photographs from the Celebrities series.

PZ: How does this pandemic impact your work and sensibility?

JD: A time to abstain, persevere, and conceptualize.