Paul Zimmerman in conversation with MICKO

Paul Zimmerman: How did you develop interest in art?

MICKO: Up to the age of 9, I lived in the outskirts of Skopje in the only house that was located in the park. I did not have a radio or TV, the park was my yard, my garden… I was jumping with locusts, I was dreaming to touch the stars… Then, I started to wonder about art, architecture, cartoons… and later to work professionally on everything that inspired me. I started to touch the stars, the dreams started to become reality…
I was interested in the movement (kinetics). The work I painted at the age of 15 (in 1969), forms in various colors painted on a panel was created in order to connect the panel with an axis and a rotor so the image of the multicolored forms can circle around, and thus, to be able to see how the colors are mixing. That particular work with a circle, as well as others with organic forms from that time were the basis of my artistic creation and they defined me as an artist. According to many art critics, this beginning, the paintings of that time, was extremely original in the historical context of art.

PZ: Black is dominant color of your work. Why is it important?

M: I come to paint only with black after 50 years of artistic creation. Back then, when I start painting, interested in movement, I was curious about the result of the mechanical movement of the multicolored forms painted on the panel. It took me 50 years to realize that the black color contains all colors, that it is not necessary to move the painting because the light is naturally moving, so I started to paint large canvases with black forms and patterns which generate endless sensations.

When I started to paint only with black, besides the colors I immediately got rid of the brushes as well, but what is the art if not “… elimination of the unnecessary”? (Picasso)For me, the black color means freedom, complete liberation. While painting with black I feel my hand as a wing, I breath freely and I fly, while discovering new worlds. The worlds that I’m discovering with the black were immediately seen by the professional public ((Enzo di Martino, Italy; Manos Stefanidis, Greece; Melanie Zefferino, Italy; Zsolt Petrani, Hungary; Aleksandr Borowsky, Russia…) and I believe they are visible to the wider public too.

M: The constant focus and movement from one form to another led to big turn in my most recent art production – to get rid of the colors (now I paint with specially produced black pigment), but of the brushes as well. So, in the process of creation I use various tools, rakes, combs, fingers… with which I scratch on the thick layers of black paint on the canvases… and it results in fantastic, very specific patterns where the light is an integral part of the painting. That become my artistic mark. This process makes me feel free and confident. 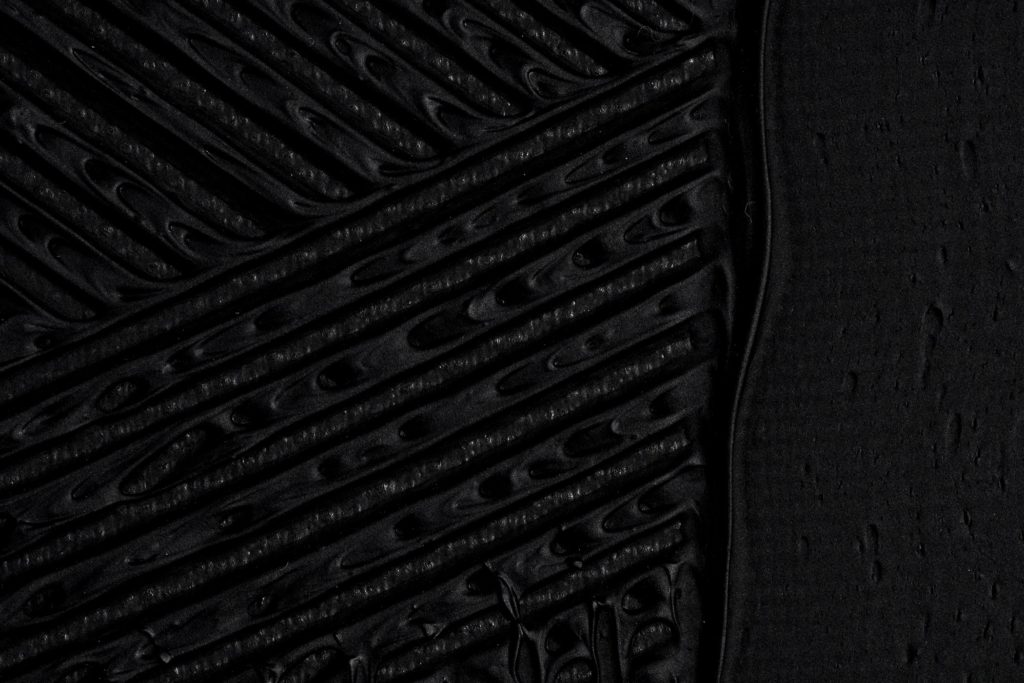 M:The new works start in my mind, more precisely in my imagination. It is a most convenient place for creation because there is no limitation… at least if you don’t set it for yourself, which I don’t! On the contrary, I explore by focusing, going deep into my topic of interest without limits. The outcome of that journey is always both various and similar in the same time. The various results come from the freedom I feel while discovering new worlds in black, and the similar results come from my way of thinking that I cannot get rid of even in my imagination. Those similarities are actually the characteristics which are visible to a professional eye and which are defining my artistic style:
Monochromatic – because I use only one color (black);
Modularity – because I always paint on previously devised formats, that are which are in a mutual relation, as modules;

Multiplicity – because I multiply the forms, in addition I multiply the paintings in polyptychs, thus creating new works;
Minimalism – because the works, concept and context of my artwork are achieved by minimum elements – which is actually the hardest thing to do, but … we are talking about 50-years artistic experience after all!

M: This is very good question! The starting point of creation for any artist is clear. Every artist starts painting (or creating in another media) when the idea for the creation is mature, when the idea is ready to exit from the artist’s head, and that moment is defined, it is not questionable. But, it is very hard to tell when the painting is finished. In my art, I involve time in the process. Because I paint only with one color, in order to create different sensations, I use all other characteristics of the material as density, the extend of glossiness, the length of time the paint to get dry to a certain wetness so I can use my tools to create the patterns, etc. The fine tuning of those characteristics lead to the final result. The painting is finished when I’m satisfied with the final result. And I admit – sometimes I don’t recognize the moment when the painting is finished and while looking for a better result – I ruin it! These are those dangerous places on the road of the artist’s quest for perfection.

M: I’m a multimedia artist. I have expressed my creative energy during my professional life in many different media – cartoons, satirical paintings, painting on glass, animation film, palindromes – but continually working and constantly researching in drawing and painting. My painting artwork consists of 3 phases: Form 1, Form 2 and Form 3. I started with the Form I (where I was painting organic form in unorganized systems and where I used almost all colors), then I continued with the Form II (where I dramatically got closer to the organic forms from the Form I, demolished them completely, painted their details on big canvases in two colors, out of which one is always black), to come to Form III (where I got rid of the colors, but of the brushes as well, so I started painting exclusively with black.

M: I met Pierre Soulages (the greatest living painter in the world who celebrates 102 years age this year, and whose artwork is also predominantly black) in his home in Sète, France in 2018. He was fascinated by the structure and the patterns of black color on my canvases, especially with the fact that I have got rid of the brushes in the process of creation. He was especially excited about my authentic method for leaving a trace and creating a patterns’ structure on the surface of a thick layer of black acrylic in my paintings.

The artists use similar or even same elements, media, techniques… but every artist should find his/her own path to the authentic result, to his/her personal emblems. My emblems are the forms of any kind: geometric or organic, gaps, lines, stripes, patterns… which expressed through the deepness and transcendence of the black – became my personal mythology. Surprisingly for me was the comment of my colleague and friend Maty Grunberg, a famous artist from Israel, who says that front my black paintings people should kneel and pray. Then I realized how the others experience my works.

M: Art is a life-long adventure! Regarding my art, it can be illustrated the best by this Japanese folk tale:

Basically, the philosophy of my art is sublimated in one sentence: when you focus with love and passion on what inspires you the most – new worlds are opening front of you. These are ever-changing, spiral discoveries through which the universe is revealed. Every new painting is a new world. And, I paint series of many paintings (polyptychs) that standing one by the other create new universes.

M: The focus of my art creation are always the forms and this is a never-ending story. Right now, I’m exploring the effect of painting objects with different shapes and materials with black (of course), such as perforated aluminum plates, old copper trays, big size plastic balls, etc. I’m imagining it, but also I’m curious to see how the black patterns will look on the differently curved surfaces and different materials in reality. As Picasso said: “Everything you can imagine is real”.
PZ: How does the pandemic influence your work and sensibility?

M:The pandemic influenced everybody’s life. Including mine. I’ve been infected and successfully went through the Covid-19 in June last year, and I don’t really understand why do I need to go through that experience, why the human race in general need to go through that experience… not so obviously and clear to us, but must be a reason for that. What is obvious is that the world is going digital, virtual – which can be considered as a new challenge for the future way of living in general, and particularly for the art. As the only constant in life is the change, and as I love challenges, I started to explore the possibilities and techniques for digital creation, and I’m very excited about it. The new digital and virtual worlds are revealing themselves front of our eyes… What a time to live in!