“A representation of our creative power beyond one’s own mortality…”

Paul Zimmerman: You are a multimedia artist with a strong interest in spatial play and material. Where does it come from?

Fiona  Watson: Spatial play definitely comes from the rigorous training I received from the National Art School in Sydney. The studio focus there is all about form and the observation of those sweet intersections where object plays with negative space and light. I am naturally very tactile and I consider form without the ability to touch such a tease. I do encourage people to touch my sculptures unless of course they are fragile. So in this sense the material of a sculpture must be alluring to view and compelling enough to want to touch it. I love the feel of cool smooth marble and finished bronze. Where does this come from…perhaps an innate sense of wonder and curiosity, never relinquishing the inner child. One of my earliest childhood memories was shopping with my mother. I was inspired to feel each and every fabric I came across in a clothing store, drawn to the textures inviting my visceral touch and discovering how fabrics draped. I was repelled by synthetic and drawn to natural yarns and weaves. I am certain I must have annoyed the proprietor and embarrassed my mother more than once.

PZ: Which medium do you prefer to work with?

FW: That is a question similar to which place in the world I’d rather be. There are so many things to like in different places as there are so many things to enjoy in different mediums. However I feel at home with anything where I can get my hands engaged and feel texture. When I am making photographic images, I am usually photographing something I have made or manipulated by hand rather then in a computer. I do love working with bronze. The knowledge that it is a process that spans many millennia is strangely comforting. In our oversaturated digital fast paced world it is a way of slowing down and really crafting by ancient method. I am equally drawn to carving marble for similar reasons and it is very satisfying to touch the finished piece.

PZ: Your bronzes and works on paper are probably closest to alchemy. What is your process?

FW: I love the process of taking something ordinary and impermanent and turning it into something extraordinary that will exceed many human life times. I find this exciting, a representation of our creative power beyond one’s own mortality. The process of making bronze begins with melting microcrystalline wax into sheets then cutting, twisting and manipulating shapes with my hands. It’s a playful investigation of form and space. Those shapes are individually cast using a lost wax casting method. It becomes quite complicated and delicate attaching the system of wax rods that will become the entry channels for the molten bronze. An investment waste mould is created around the system in order for the wax to be burned out through firing. After several more processes, the bronze is poured into the ceramic shells. Then begins the fun part where the bronze is revealed. At this point it feels like an archaeological dig and each shape is finally cut away from the support system and polished back. I then bring the shapes together in the welding bay to form the final work. My works on paper are far less labour-intensive, the antithesis of casting, and the results are random and magical. I use metal filings embedded in the bronze paint. I then apply patinas to oxidise the metal within the paint allowing the chemical reaction to weave its magic. I manipulate and monitor this process to arrest the oxidization, and draw into the papers.

PZ: What inspires a figurative or abstract form for a particular piece?

FW: The creative process itself informs the outcome of each piece, meaning I get into a kind of meditation or flow and I let that guide me to an outcome. It is quite organic. My thoughts guide me to where I need be in the same way as anyone would simply walk toward an observed object, at first a bit blurry. That observed object is in my imagination and ultimately expressed though my thought process into my art. It becomes clearer as a draw nearer. Sometimes it’s an abstraction first and foremost, other times I am thinking about human form and it leads to an abstraction. 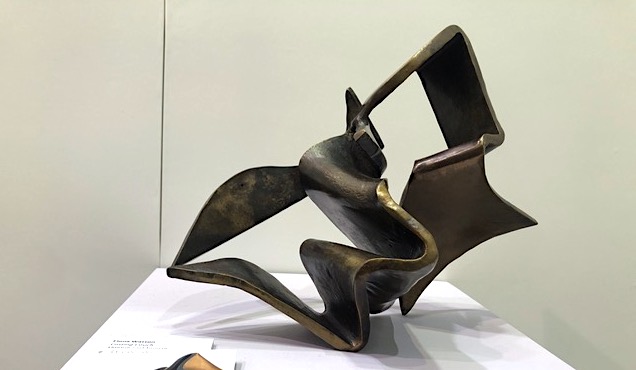 PZ: How do you select your object for photography?

FW: With direct reference to my Shadow Works, It’s all about the light and shadow, so I need to be clear about how the object transforms and reads in two dimensions. My shadow works were the outcome of a six month investigation playing with techniques and materials. Finding the right weight of weave that will pick up in camera as an ambiguous object was imperative, ensuring there is little deviation between the object and how the shadow reads in camera was key to the success of this series.

FW: I grew up in Sydney a couple of doors down from the renowned photographer Max Dupain. I was fascinated by his love of light in his iconic black and white photos. He was in my eyes someone highly creative and inspiring. I definitely feel he was a strong influence for me when I was gifted a small reflex camera by my father at age seven. In the sculptural world, I remember visiting the studios of Barbara Hepworth and just falling in love with her work. I am drawn to and admire many twentieth century artists such as Anish Kapoor, Lipchitz, and more locally Ron Robertson Swan who was my senior tutor at NAS. Clara Hali has been my mentor for many years and I really admire her work, mainly in bronze.

FW: I have several projects simmering away. More connected bronze pieces and I am planning to paint images of the Australian desert from the sky inspired by a previous journey to the centre of Australia to observe Lake Eyre in flood. I am also casting cow manure into bronze. I’ve been collecting axe heads and creating bronze sleeping faces inside, it is a comment on how disconnected man has become generally to the practical tools that allow us to be self sufficient. I think we rely on technology way too much.

PZ: You studied in Australia and Great Britain. How would you compare art practice in these countries?

FW: I did not actually study in Great Britain, my fine art education was in Italy and Australia. In the UK I was mostly working in the arts as a designer and painting in a studio in London. However every art academy pushes a different agenda no matter where in the world you are. The RA compared to Goldsmiths in London are worlds apart, as is COFA to NAS in Sydney. What I can speak of is my time spent in London, where anything and everything seemed possible. Artists worked from co-operative spaces by the river Thames and took over abandoned buildings to make studios, it was the 90’s and felt very Bohemian. Here in Australia, the agenda and atmosphere is way more conservative, however it is probably just the time we are in now.

PZ: You won Clyde & Co Emerging Artist Award in 2017. How did it impact your artistic career?

FW: I’ve certainly leveraged some advantage to gain attention in International arenas. I’ve showed in China and had the good fortune to be connected with a Clyde & Co colleague in Shanghai to assist me with translations from English to Mandarin. I’ve also been asked to show in Italy, which is of course always wonderful and I managed to travel just before the world went into Covid disaster. Luckily the Italian exhibition was one week after the Shanghai show, so I was able to have Shanghai as a stop over for ten days on my way to Europe. I can only dream of this now with the Pandemic gripping the world. I feel so lucky to have travelled when I did however I still aim to do a Paris residency one day hopefully in the not too distant future. So I do feel the Award opened up international opportunity.

PZ: How does the pandemic influence your work?

FW: Actually it has encouraged me to read my own work differently through quieter moments. There appears to be more time to contemplate with the world forced to slow down so I am relating to my work somewhat differently. I am not a political artist so I am not compelled to make comment on the pandemic through my work, however yes it has influenced my thoughts and practice. I view my work mainly from a place of considered moments in time, coming together in an energetic poetic way, each piece a part of the whole. Perhaps there’s a metaphor here for how we are living through the pandemic, a string of considered moments rather than a planned and directed outcome. I had to go into lock down on the farm with my ageing Mother to keep her from harm. This resulted in six weeks with a person suffering advanced dementia, so it was impossible to be working on the tools with a Mother in need of constant attention. It did give me time however to do some work with waxes and clean up some sculptures I had already cast.

So at the beginning of the year I had been focusing on thinking about work I wanted to make in Paris, however ended up casting cow manure into bronze instead. To sum up 2020, Bushfires, followed by a Pandemic, then dealing with a close family member with dementia. There is something deeply satisfying in the result of casting cow dung into a state of permanence. And in keeping with the four letter word that so represents 2020.