Paul Zimmerman:  How did you develop interest in art?

Gillian Loop: Art was not a developed interest but something that has always been part of me. I was so prolific as a child that my father built a rack which was attached to a school desk to hold a roll of butcher paper on which I could continually color and paint. So art has permeated every aspect of my life but my full dedication to fine art was driven by mortality itself. I just couldn’t continue to not create art in the traditional sense, any longer.  I simply could not allow more years to pass without being me. This may sound melodramatic, but it was always my intention to retire as an artist. I thought that I could make enough income to secure economic independence as an artist. The problem was that I was making that income by working in a technical field which made me profoundly unhappy. I was living a lie which I was cognizant of on a daily basis.

GL: I think the most challenging aspect is again, making enough money to secure my economic independence. Not that I would ever go back to a technical career, but what I see happening with other artists all too often is the replication of a style which may not be their own but is one that sells.  I have been tempted to engage in this myself.  I have the ability and the skills to create in various genres however I think in the long run that staying true to my own vision and providing a version of my work which feels authentic is more valuable. For example, I love Basquiat too, but I don’t think I would do either myself or collectors any service by becoming yet another artist stealing his style.

GL: I usually create an entire underpainting which is a gradient field of a color or family of colors. I use this as a basis to layer sliced paper elements which sometimes match or may pull that color field in a different direction. I have also used complimentary printed images to create additional interest while matching the base color of the area where I am working, but I am feeling I have taken that method which I liken to traditional collage, as far as I would like. Now I primarily use sheets of abstract imagery which I create specifically for surface interest. I will sometimes make small sketches on the paper  so that after it is cut and applied to the canvas, tiny remnants of that image can be discovered by the viewer. I love the idea that a collector may not find or see all of the details until they have lived with the artwork for a while. 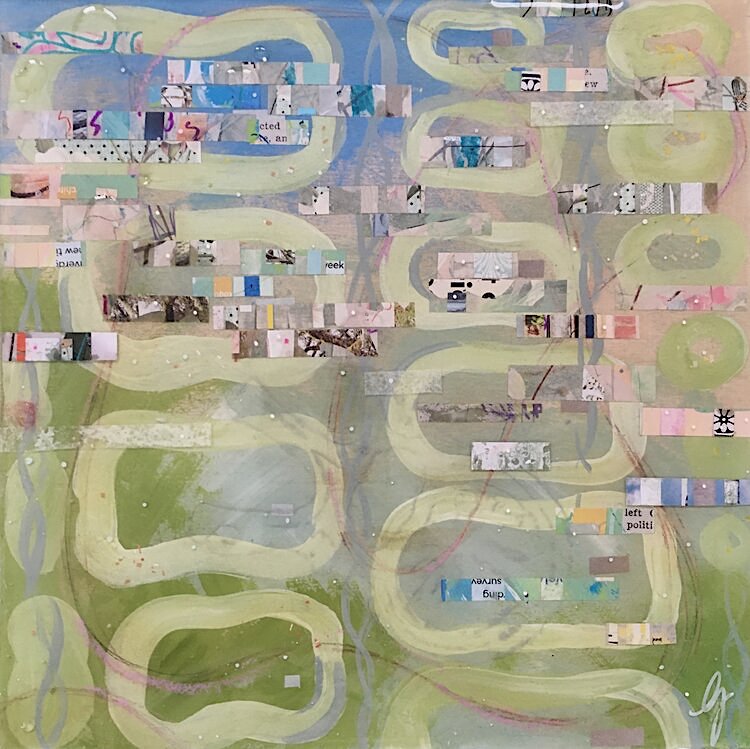 GL: I am a big-time lucent dreamer but often I will dream imagery which is not guided but simply just appears in a dream. It’s definitely a light-bulb moment when it happens. It is the one case where I know where I am heading but otherwise I start a new piece with only a general idea of where I am headed.

GL: I have overworked pieces by becoming overly excited about the image which has emerged and have basically wanted to stay in that moment, or rather overstay in that moment, so I try to rest just on the precipice of that excitement.  However, the honest truth is that sometimes I get it wrong or I may feel that a piece is complete and later determine that it would be better to rework to fit into the scheme of a new vision, but in a nutshell it lies in my emotion.

PZ:Have your practice changed over time?

GL: I was a fashion designer and a textile artist in an earlier career so just taking that work into account would make one piece indistinguishable from another. This is actually a very timely question because I had recently questioned whether a lack of continuity was a hinderance to my career, but just last night I just watched a YouTube video of the entire body of work of Picasso, pre-dating cubism. In fact, I   was at the Bemberg Foundation in Toulouse, France a couple of years ago and saw a portrait he had painted early in his career.  No one would guess that this was his work because the method and style was so traditional, so I knew that his work had evolved over time. What I did not realize until seeing the YouTube video is that his style did not evolve so much as bounce around. He was painting like Matisse in one instance and then Chagall or Lautrec in the next. He was all over the place in his early career. I found this to be encouraging and also inspiring.

GL:I have obviously mentioned Jean Michel Basquiat for a reason but the man that moves me most right now is Mark Bradford. He is a power house in my book.

GL: It is hard to define.  It’s like trying to define love. I would say that it is the imparting of emotion or better yet the act of evoking an emotional response. It’s an unforgettable meal, a book you can’t put down or a film you don’t want to end. It is the sense of awe standing next to a massive Bradford panel.

GL: Having just moved from Southern California to Salt Lake City I am actually waiting for my studio here to come together, although I guess I would have to admit that I am working mentally. I have been sketching some ideas which bridge the work I have been doing lately to incorporate silhouettes of human bodies. I am extremely eager to get back to working on a canvas. Hopefully before this is published.

GL: In two ways really.  The first is that without brick and mortar exhibitions and the usual sales, the encouragement from physical responses is missed. The second (the upside) is having the opportunity and space to do the mental work.  Day dreaming is the best and I think it feels like being a child again because there are fewer deadlines and constraints. It feels like when you were a kid and would imagine a future that you could hardly wait to get to. You couldn’t grow up fast enough. I feel like that now with my studio in limbo. I can’t get there fast enough.